Part 2 of vet visit. The bill. The one that made me faint.

My vet is not a bargain vet. I could find a cheaper one. But I’ve been to a few, and I’ve learned that the peace of mind that comes with having a vet you have complete confidence in and really like is worth its weight in gold. And I don’t just like my regular vet, either. I like the other vet in the office, and the staff as well. No one talks down to me, everyone patiently listens to my bazillion questions and my overanalyzing. I find that I like women docs more, too. I can probably chalk this up to the fact that I’ve only had interactions with 2 male vets and I didn’t feel like either of them were particularly affable. I’m sure there’s plenty of really awesome male docs. I just haven’t met them. In conclusion, when your cats are your children, nothing is more important. So I’ll happily pay a lil more for their care.

I’d expected a decent-sized bill. I just didn’t expect HOW much.

2. Bloodwork. Expected. Not expected? Adding the charge to recheck Taco for FeLV and FIV. Suggested because one of his pupils was noticeably bigger than the other. Apparently, even kitties have been screened for this as babies, it’s recommended that they’re screened again 2 months after moving into forever home. Taco wasn’t, and either of these could be a cause for different sized pupils. This is where paying extra for a good vet comes in…Upon your kitty’s first visit, they take his or her picture for their records, as well as make a little laminated tag to put on the carrier. My vet compared the picture to the live Taco and noted that his pupils were fine in the pic. DETAILS. I LOVE THEM. I haven’t gotten the results back yet. Also another reason I love my vet? They’re super up on technology. They email.

3. Rabies vaccine. Expected. Don’t necessarily agree with this one, but it’s required for his kitty license and if we need to board them on vacay.

4. License. Forgotten about, but expected. Stupid, because they’ll never get out. Of course it’s possible, but my cats are terrified of the outside world. Twice the door has opened accidentally and not noticed for a few hours and no one went near it.

Ask your vet about this if your cat’s poop makes you gag.

Don’t laugh. Taco has the MOST rank-smelling poo in the world. It’s impossible for me to understand how he and Moosh eat the same thing but comes out SO much more foul from his ass. Adding the probiotics helps a bit. Worth the money. I promise.

Not expected. Was reminded it’s coming up on flea season again. Wish to avoid an invasion. And yes, I know there’s natural options for fleas but I’ve tried all of them, and trust me, they don’t work in Florida. It’s all dirt here, which is flea heaven.

Taco’s stupid prescription food. I suppose it’s not horribly expensive but in my eyes, it is for crap food that’s not natural or organic or byproduct-free. But it helps him, so who am I to complain?

And that, my dears, is why Mommy is eating PB&Js for awhile. I never thought I’d spend so much on a vaguely healthy cat. Sigh.

Still waiting for my brats to start working. The slugs are sleeping at the moment. 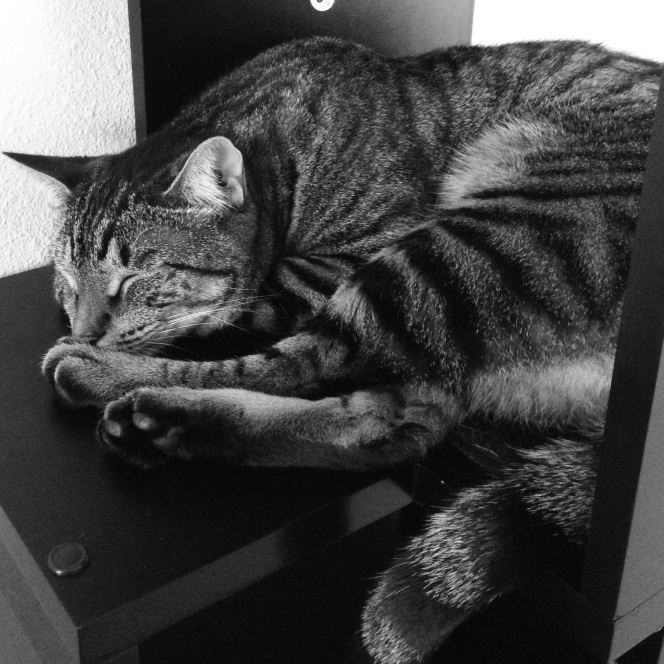 Get up and make me money.

I’m about to send them out with resumes.