Today is the shared birthday of my baby boys.

The boyfriend refuses to believe this is possible. Moosh’s birthday is, of course, not as definite, since he was found as a kitten after being thrown out of a car, but given that Taco was birthed behind my friend’s house, I DO know this for a fact. Whatever, they don’t care when their birthdays are. As long as they get extra treats, they’re ecstatic. I don’t know how to bake cat cakes, or else I would. Maybe hash brownies with catnip instead of hash? I don’t know how to make hash brownies, either. I’m pretty sure chocolate is bad for cats, too. Well. They’ll just have to deal with a little extra love today. Crap, I think I need to buy them wet food, too. Boy, I’m an awesome mommy.

Moving on. Moosh Moosh is officially an old man at 5, which in cat years is 37. 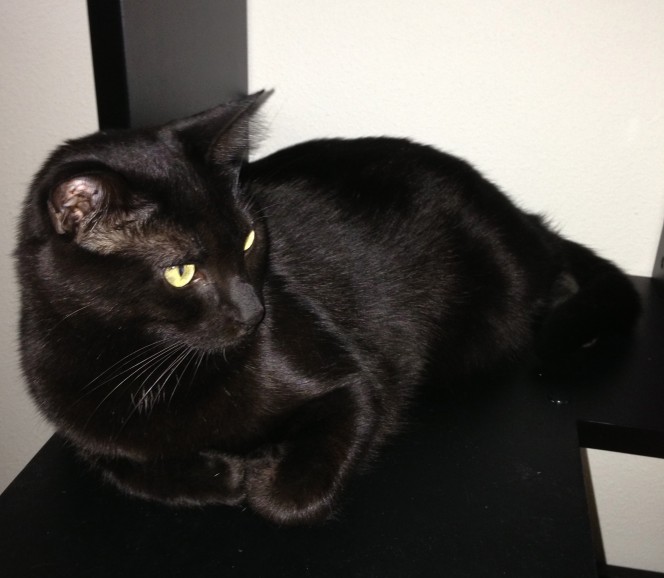 Does he always have to be sitting on something black?

He’s older than ME! But still younger than the boyfriend. HAH!

Taco is still a little younger than me, 3 actual years, 29 in cat years.

Shouldn’t he be running out of steam yet? He thinks he’s still a kitten. I just tried telling him that and he looked at me, then continued to lick his foot. Ah, to not care about one’s age! Then again, I think I’m still in my twenties. At what age is it no longer appropriate to wear neon? I hope never. I’m not a fan of Chico’s or Ann Taylor Loft. But I don’t want to end up looking like those ladies who can’t let go of their youth, wearing midriffs and stripper heels. Please smack me if I’m ever that lady.

I suggested taking the kitties to the beach for their birthday, after all, it’s one big litter box…but they hate fresh air, and probably water. Oh well.