This picture of Moosh in a kitty bed on the human bed does not relate to my story at all. Just felt like throwing it in here.

I have been a bad kitty mommy this week. I’ve been so busy and cranky and having to deal with a bazillion things that I didn’t notice the litter box was at capacity. The other night, Taco loudly made his displeasure known. When I realized the cause of his discontent, I went over to deal with it. But the Litter Genie was full, so that took some extra time to re-set.
I noticed Taco had stopped meowing. Why? Because he was peeing on the couch. Yes, we have puppy pads there for this very reason, but he TRIED to hold it. From the sheer volume of pee there, I assume he’d been holding it for quite awhile. Those puppy pads kinda suck, too, his paws were wet — so I panicked and did what everyone (I think everyone, anyway) would do…I marched him to the bathroom to attempt a paw washing in the sink. This did not go over well. I got a couple of vague rinses in and gave up, tried to dry them off with toilet paper and promptly locked him in the bathroom for what I thought would be an appropriate amount of time for him to clean himself up and not get cat pee smell everywhere. As I did that, he meowed weirdly, in a way that sent me into yet another panic that I had hurt in somehow in the sink struggle.

I think he was just traumatized, because he seems to be fine now.

It’s been awhile since he peed on the couch, but it’s just as frustrating and even more so because I could have prevented it. I mean, living your life with a shower curtain and puppy pads on your couch is hardly a way to live…and I didn’t need to make matters worse. Of course, it pissed off the boyfriend too (who yes, could have cleaned the litter box as well) which I do understand…after all, he did buy the couches and all. But he’s a cat (Taco, not the boyfriend), and it’s mostly my fault anyway.

This week has just been unpleasant overall. But this always raises my spirits: 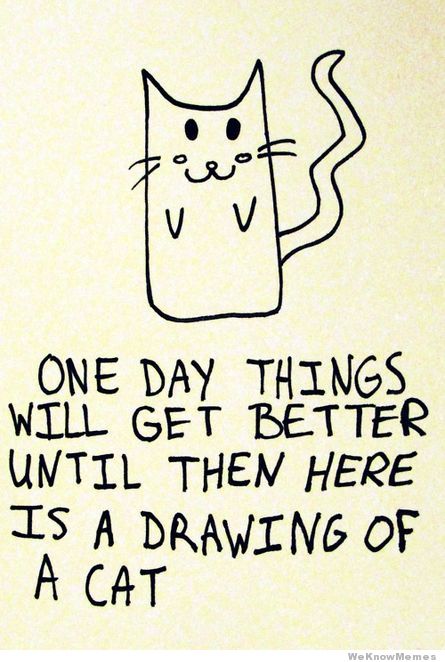