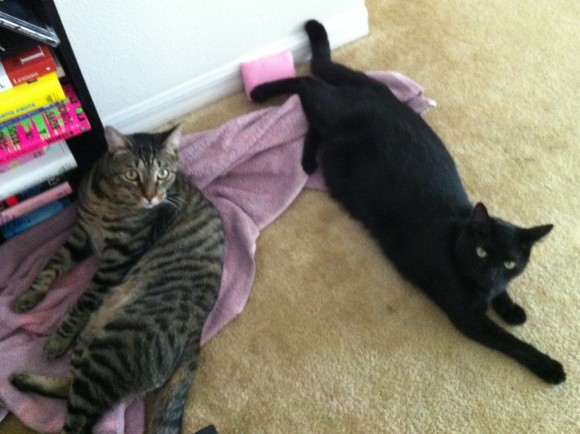 These little devils cause gray hairs.

Today, Taco has puked 5 times. All throughout the day. There’s really nothing in the house that he could have gotten into and he’s acting perfectly fine otherwise. We’ve taken him to the vet before for the puking, and she said that based on his age and the normal tests, it was likely just upset stomach and prescribed him Pepcid AC. Yes, the human kind.

Only Taco, being the smart little asshole he is, figured out Pill Pockets, and refuses to eat them anymore. So when he stopped puking so much and started ignoring the Pill Pockets, I just gave up. Since then, here and there he’s been pukey, but really, what cat isn’t? Even Moosh pukes sometimes. Mostly hairballs, I mean, it IS Florida and all, and I see how much hair they have. It’s only natural. I hear pumpkin puree is supposed to work for that, has anyone tried it?

Anyway, I don’t think it’s the hairballs today. He’s puked up all his food AND some Greenies (which will turn your beige carpet a lovely shade of green!) and even did the weird MEOWOWOWOWOWOWOWOW thing that cats do right before they puke…only MY cats have never done it right before they puke. In fact, the only reason I know about the MEOWOWOWOWOWOWOWOW “I’m about to puke” noise is from Jager…who was sick with FIP. My vet said that the noise was normal, but I now associate it with a dying kitten (which I know, logically, isn’t what’s wrong with Taco as it’s really only a disease that hits cats under 2, and usually way younger than that) and that’s extraordinarily unnerving.

And this is supposed to be my vacation week and I was looking forward to “me” time tomorrow (by vacation week I mean I have the week off one job and 1 and a half days at my day job which may not seem like a vacation week to you but believe me, it is to me) but now it looks like I’m going to have to take Taco to the vet, which also makes me feel like a horrible cat mom and horrible person in general for lamenting the loss of my “me” day for what could be a sick kitty. But something always happens on my days off. And I don’t get a lot of them. Plus, the vet costs money. Money I don’t want to spend at the vet. I love my vet, but really, I would like to see less of her. Just got the “Time for Moosh vaccinations!” postcard in the mail the other day. I should really get a volume discount.

But I suppose I should be happy I’m not getting hit with a hurricane and using my day off to evacuate. And although the RNC is going on just on the other side of the bay, I haven’t had any run-ins with crazy republicans. I did, however, put my “Republicans Hate Kittens” sticker on my car (it has a sad kitty face on it too) in hopes that I offend someone. I reason that any republican who actually does not hate kittens is probably an ok person and wouldn’t be offended by such a sticker anyway. I see the bright side. I guess I just feel like wallowing today. In addition to worrying about the kitty.