I will never understand why it takes Taco two full days to stop hissing at Moosh when he gets back from the vet. It’s not like his scent isn’t EVERYWHERE. Sometimes I think they’re really smart, and sometimes I agree with the boyfriend about them having pea brains.

How can he not recognize his brother but recognize the couch as a place to pee?

This is where I vent.

I have no help with this couch pee thing. My vet has helped with all of the medical issues possible, and I’ve taken all the advice possible about helping him stay stress and FIC-flare-free.

Yet he peed on the couch again the other day. I don’t even really want to talk about it, because that means facing it, and yeah, I know, it’s a COUCH, but it’s OUR couch and while I’m totally ok with my crazy cat lady status, I’ve completely accepted that IS my life, I’m not ok with my house smelling like cat piss. I’d like to have people over. I’d like to utilize the couch for more than just the puppy pads that are currently adorning it. I’ve done everything to stop it. I don’t know what else to do. It’s a fairly new couch. Do I just accept that it’s never going to stop? Do we just get rid of the couch? What if we have it professionally cleaned and all and he pees on it again? What if we get rid of the couch and he just pees on the loveseat? I’m fully aware that there are worse problems in life. But this is MY life and I want a damn couch I can entertain people on. *I* would like to sit on my couch. MY usual seat was on that couch.

This brings me back to my failed bid at My Cat From Hell. When they responded that they wouldn’t be coming to Florida, they said that Jackson Galaxy sometimes does Skype consultations, and I could try. So I did. I got a response yesterday that he is currently filming and not available, but referred me to another cat behaviorist. So I checked that out. It’s TWO HUNDRED AND TWENTY FIVE DOLLARS for a HALF HOUR PHONE CONSULTATION. I’m in the wrong effin’ business. Do I have to go to college for that? I’m already the go-to cat problem person for people I know. I need to start charging. Not trying to brag or anything, but over the years I feel like I’ve amassed enough cat knowledge through personal experience and my undying devotion to the babies that I’m probably pretty qualified already. 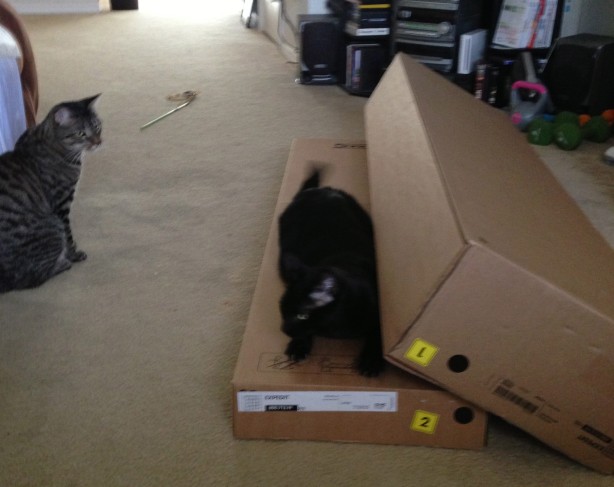 Jockeying for position on Ikea boxes.

Wow, what if the reason I always get the lemon cats is because one day (today?) I realized my calling? I’m 30 years old and I still don’t know what to do with my life. Maybe I’m supposed to be the girl Jackson Galaxy. I DO have tons of personality and tattoos. And I can thing of worse things than dealing with cats all day. And I could be MEAN to bad kitty owners, because I would get paid upfront, like these $225 consultation people.

But first, I need to fix this couch thing. So far I can’t find an answer. This is one of those times where I just want someone to tell me what to do, and I do it, and it works. This one is over my head.

So if anyone knows anyone that will help me help Taco to stop peeing on my couch for significantly less than 2 hundos, let me know. I’m tired of thinking about it.