It’s funny, too, because I started the blog when I was trying to alleviate some emotion about my sick kitty, and found it incredibly cathartic and fun all the way through. But then, when the worst thing ever to happen to me in my life happened, I didn’t write. It was just too raw. My dad died in February. I know this is a natural path of life — parents are supposed to die before their kids. But I was NOT ready. And for all intents and purposes, I shouldn’t have had to be. It was sudden, it was unexpected, and it hit me like a pile of shit and bricks and anvils. I also get that people have way worse things happen to them. But it’s my DAD. I only had one.

So this is what I did instead — I went back to school. I’m a 35-year-old married cat mother of 2 co-ed. It was one of the last things I talked to my dad about. Literally the day before. And then, against all historical evidence and past actions, I actually followed through on something I talked about. Not sure why my dad’s death shocked me into doing something. It’s not like my dad would be any less proud of me from beyond the grave. He thought everything I did was wonderful.

Now here I am, working a full time job and going to school full time, too. At first I just wanted to follow up my AA with a Bachelors (in Legal Studies, if you’re wondering) but now that I’ve discovered how much better school is when you’re old enough to appreciate it, I’m looking at law school. Why the hell not? But for now, I’m keeping my options open, which brings me to chemistry. Why chem, you may ask? That’s not exactly a law-y thing. And you would be incorrect. Patents are filed by patent attorneys and patent agents, and to even take the test to become one of those, you have to have a BS in an approved science. Now, I’m a smart girl. But math doesn’t come easy to me, so I avoid it. I think I got a D in chem however many years ago my sophmore year of high school was. But to get pretty much any degree in science, you gotta chem. So I’m chem-in’. Which brings me to cats (yes, I haven’t forgotten the cats). As I was preparing by reading for next week’s class (dude, I am SO adult about this – ME, preparing! I probably would have given my dad a heart attack if he was still alive), I learned that a positively charged ion is called a CATION. So now I’ll forever remember that a cation is a happy kitty. 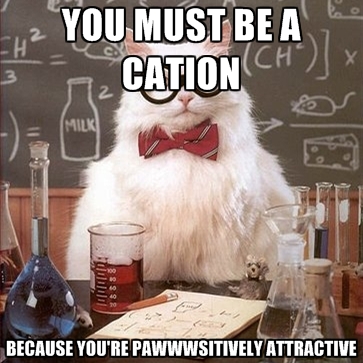 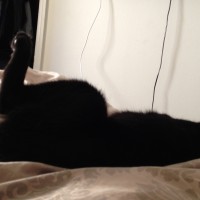