The chronicles of Taco are neverending.

So I decided that since Taco is having a flare-up, we should try the laser therapy again. It’s not as expensive as you’d think, and my vet said that she has had success with cats who have worse flare-ups than Taco. Last time we only did one session, this time we’re going to try for the recommended 2-3. The weather is crazy windy out right now and for some reason that seems to freak Taco out more. I mean, I don’t like wind either, but it doesn’t cause MY mental issues to flare. Then again, my hormones do that for me once a month. That’s totally another story.

Taco is again a laser kitty. I don’t know why laser sounds amuse me so.

I also went to the pet store yesterday, a real one, not one of those big fancy “we don’t really know anything about pets” places. I love small businesses. I swear, I have been a cranky old lady since I was 14. I refuse to shop at Wal-Mart. Anyway. I needed more cat urine cleaner. The one that I had sucked. Or Taco’s pee is just really really strong. Anyway, I got a new kind (still smells like pee, this last episode of his was a doozy, none of the other couch pees have been this strong especially after cleaning, AND it was on the boyfriend’s favorite seat…yeah, that went over well). And I talked to the pet store guy, who was super friendly and you could tell knew what he was talking about, like the kind of people who own businesses because they actually give a shit about what they’re doing rather than making a boatload of money. He made a lot of suggestions. And they were all things I’ve already tried. I could see the surprise on his face, I don’t think that he’s ever had such a thorough crazy cat lady asking for help before. He quizzed me on my number of litterboxes vs. number of cats (2 cats, 3 boxes) and then he THOUGHT he was going to stump me when he asked if I used 3 different kinds of litter…and the answer is yes. Yes, I buy THREE different kinds of litter. I felt like passing this test elevated my crazy cat lady status. Unfortunately, it doesn’t get me any farther in fixing Taco. When I say I have tried everything, I really really mean I have tried everything. I even spray the couches with cat repellent.

Here’s what I did do. Because, you know, my parents always taught me that you should always ask for what you want, because the worst answer you can get is no. So I emailed the cat behaviorist people. I told them I can’t afford their $225 phone consultation. I told them that I have done everything I can possibly do and I just want to help my kitty. So I threw it all out there and asked if I could barter. Granted, my skills may not be in their demand (I work in marketing, they already have a really nice website and it appears they don’t need any help getting business) but I can do copywriting, proofreading, research…I even threw in fantasy football tips (although this may not be the year to ask me those, I’m doing miserably). I did leave out crafts, I’m not sure “decoupauged tissue box” is a viable offer. I haven’t gotten an answer. But even so, I tried. I didn’t ask for charity, although I certainly would accept it from them if they offered. So if they say no, I’m no worse off than I was before. It at least made me feel good, because I’m not giving up. I’m hard headed like that.

I just wish extreme love was enough to fix. In a perfect world it would be. 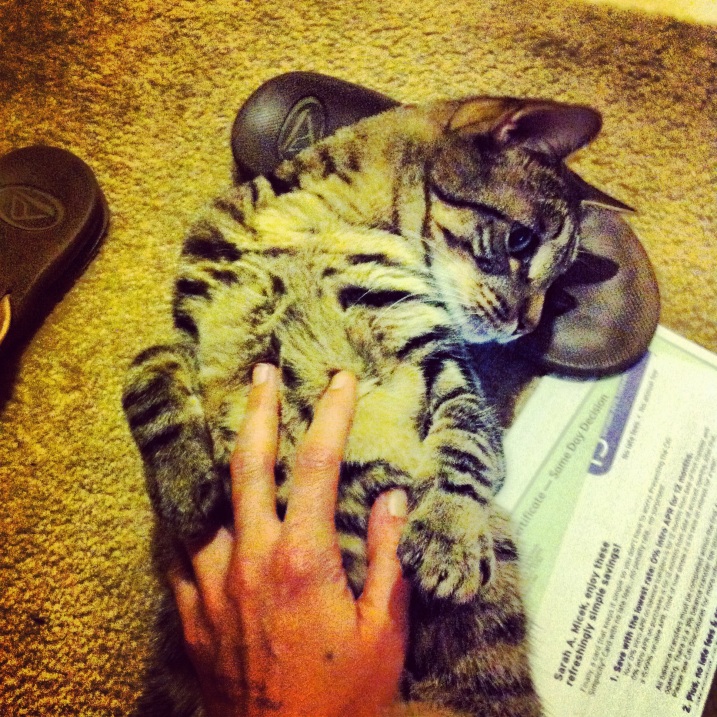